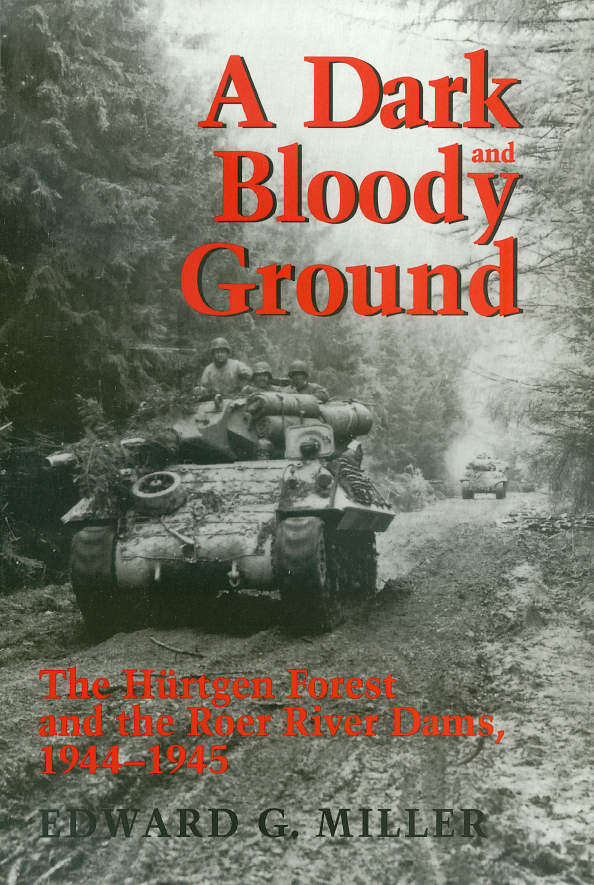 This virtually unknown five-month campaign led to staggering American losses between September 1944 and early February 1945 in Germany. It included some of the most intense close combat of World War II, including, in the opinion of some Germans, the fighting in Russia. It saw the most costly U.S. divisional attack of the European campaign. Occurring largely between the D-Day landings and the Battle of the Bulge, Americans have paid the fighting little attention. The key objectives were the Roer River flood control dams, located inside the forest, a few miles south of the city of Aachen, the seat of Holy Roman Emperor Charlemagne. The Americans could not cross the Roer and the Rhine without control of the dams, but the first attack aimed specifically at them did not begin until 13 December 1944. The Battle of the Bulge started only three days later, and the Americans could not renew their attack until the end of January 1945. It was 9 February before the largest of the dams fell. Only in late February did they cross the Roer, and it was early March before they gained a bridgehead over the Rhine.

“The Forest up there was a helluva eerie place to fight ... Show me a man who went through the battle... and who says he never had a feeling of fear, and I’ll show you a liar.”

--T.Sgt. George Morgan, 1st Battalion, 22d Infantry
The Hürtgen Forest was the scene of the worst experience in the lives of most of the thousands of German and American soldiers who fought there. The veterans remember the constant cold rain, fog, and mist, which left no chance of getting dry. They recall the mud, the mined firebreaks, the tree bursts, and the showers of wood splinters. They survived the hunger, thirst, and filth that was part of fighting in the seventy square miles of forest south of Aachen.

Most people familiar with the U.S. Army’s successful engagements are not aware of its failure in the Hürtgen Forest. The Americans failed to understand that the objectives worth fighting for were not always road junctions, forested hills, and farming villages. The important objectives in this case were the dams that the forest shielded, but these were not the objectives of nearly three months of hard fighting.

Artillery fire began to hit the Americans in Schmidt shortly after 7:00 A.M. on 4 November. For at least 30 minutes, the shells systematically worked back and forth among the American positions. A 3d Battalion NCO later said, “It was so powerful, so loud, and so continuous that it seemed to form a background that you got used to. We were so tired that we didn’t even hear the shells when they landed close.”

A soldier from Company K saw a flare shoot up from the direction of Harscheidt. “Oh! What a sight!” he later said. “There was a long line of Jerry [one of several epithets for Germans used by the Americans] tanks coming down the same road we had used to get to our platoon position.”

Moments later, the stunned Americans saw dismounted German infantry supported by tanks approaching from the direction of Harscheidt. The Americans opened fire. Captain Walker (Company L) called for mortar fire. Soldiers reported seeing one enemy tank simply detour the mines they had placed on the road the night before and continue toward the foxholes. More infantry supported by some eight tanks and four assault guns attacked from the direction of Strauch.

Lieutenant Tom Lyga’s 1st Platoon, Company L, was astride the Harscheidt road. At 8:30 A.M., he reported that his men were under heavy attack and could not hold for long. When one man hit a German tank with a bazooka round, the tank stopped for a few seconds, left the road, and then lumbered through a muddy field as if nothing had happened. One German tank destroyed two foxholes--and the soldiers in them--with point blank fire. Lyga ordered his men to pull back. Soldiers in a bazooka team dug in with Company L’s 2d Platoon fled their foxholes without firing a shot and ran toward the rifle squad positions, “yelling that tanks were coming right at them.” The bazooka men were “jabbering away,” and when German mortar fire hit, the “whole [rifle] platoon took off.”

Company M mortars fired on German infantry moving across the open ground from the direction of Hasenfeld. The fire temporarily broke up the infantry attack, but according to one soldier, “the tanks... had smashed through the forward company positions and broke them all to hell... the situation was bad.”

An artillery shell hit one [US] tank, tore off the cover on the open commander’s hatch, killed the tank commander, blew open two closed hatches, and threw two crewmen from the tank. One NCO watched as “this and that vehicle was hit. It was a terrible feeling as I had a bird’s-eye view, knowing that I was going through that fire in minutes. Just then, I saw a shell hit Sergeant Helm’s half-track. [He] staggered out to fall against his vehicle. I told my driver to pull out, and I jumped out to see how bad Helms was hit. He said, “get the hell back in and get going.”

Generalmajor von Gersdorff, chief of staff of the German 7th Army, said after the war, “I have engaged in the long campaigns in Russia as well as other fronts, ... and I believe the fighting west of the Roer, and especially in the Hürtgen, was the heaviest I ever witnessed.” He added, “The fighting in the Hürtgen was as costly to the defending troops as it was to those engaged in the offensive.”

General [J. Lawton] Collins believed the fighting in the forest was the “deadliest... of the war.”

In 1983, he told an interviewer that he would “never pick it [the forest] as the place to be. It was assigned as part of my corps sector, and reluctantly we had to fight in it..."